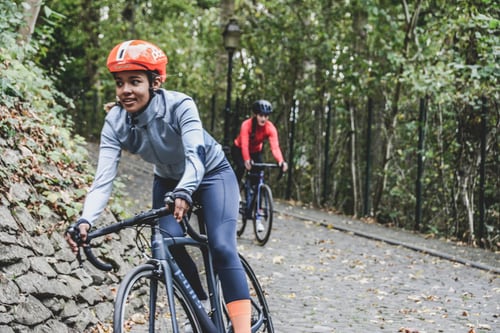 During the COVID-19 epidemic, cycling has seen a resurgence. Since many people feel it to be a safer means of transportation than buses and trains.

This is a compilation of some of the most fascinating cycling statistics and information available.

There are over 1 billion bicycles worldwide, according to estimates.  At least one bicycle is owned by 42 percent of households worldwide (580 million or more bicycles).

What are the 10 Most Intriguing Cycling Statistics?

Where is the greatest number of cyclists in the world? What are the Cycling Statistics in the United States?

This section will tell you which state has the most cyclists, as well as other information.

According to the same source’s bicycle data, around 510,000 trips are taken daily in New York City. Which is three times greater than 15 years ago.

Finally, around a third of adult New Yorkers (about 2 million) ride a bicycle at least once a year.

Women ride their bicycles significantly less often than males. One probable explanation is that women are more concerned about their safety.

A considerable portion of the female population avoids road and bicycles. Because they are afraid of inattentive drivers. Read our MTB statistics US article.

According to state-by-state bicycle data. The biggest cause for this is poor infrastructure. Portland has made sure that cyclists are properly protected.

Not just by implementing strong safety legislation, but also by providing 236 miles of bike lanes.

Cycling has had a regional economic effect. That supports local businesses, enhances tourism, and builds healthier communities as more people and visitors.

When we consider that some large European towns, such as Amsterdam and Copenhagen, have bike transportation rates of above 40%, this is certainly achievable.

Europe’s Cycling Statistics, how popular is cycling in Europe?

The popularity of cycling in the European continent is discussed in this section.

Automobiles and taxicabs, on the other hand, accounted for 77% of the total. Keep in mind that the mileage accumulated on byways and towpaths is not included in these cycling statistics.

Lombardy, Tuscany, and Veneto are the three areas with the most cycling clubs, with 629, 400, and 238 clubs, respectively.

According to data published by the Italian Cycling Federation, the majority of these groups’ members are men aged 50 to 54, referred to as Master Men 5.

Only 8% of individuals killed in traffic accidents are cyclists. Cycling deaths, however, reduced by 24% between 2007 and 2016, according to the European Commission’s Cycling Safety Facts report.

However, the two nations have significant distinctions. Males account for 62 percent of cyclists killed in traffic accidents in the Netherlands.

Whereas they account for almost 90% of deaths in Romania. Furthermore, according to the same bike collision data, a large percentage of cyclists killed in road accidents are over 65 years old (45 percent).

A total of 2 billion euros is anticipated to be spent on components and accessories made in Europe.

Furthermore, the bicycle business employs approximately 120,000 people in Europe, both directly and indirectly.

The Urban Land Institute (ULI) is a non-profit organization dedicated to urban planning and development.

Over 249 kilometers of bicycle lanes may be found in Denmark’s capital. In terms of noteworthy statistics regarding road cycling in this city.

It is believed that 50% of the population commutes by bike.

Which country has the greatest number of cyclists?

The Netherlands, as well as other European nations such as Denmark, Germany, Switzerland, Belgium, Sweden, and Finland, have the highest cycling rates.

This is mostly due to the fact that it is a more cost-effective and environmentally friendly means of transportation than automobiles. Cyclists are also quite popular in China, where they are mostly used to escape traffic congestion and packed subways and buses.

What should be the Cycling statistics in the UK?

The cycling industry in the United Kingdom (UK) has undergone a renaissance in recent years. While not being as large as in many other nations. Read our UK cycling participant statistics.

Bicycles were bought by UK households in the amount of 1.9 billion British pounds in 2018.

Halfords, a well-known British retailer of bikes and automotive equipment.

As well as a supplier of maintenance and repair services, was responsible for a major portion of these sales.

Halfords Group also owns Cycle Republic, Tredz, and Wheelies, in addition to its own-brand stores. Halfords accounted for a quarter of the UK bicycle market in 2017. Read the the UKS bike theft statistics.

It’s evident that an increasing number of individuals are choosing to bicycle.

They could consider it an inexpensive, healthy, and environmentally responsible mode of transportation (for those who desire something more exciting than meditation).

Bicycles are the preferred mode of transportation for 900,000 New Yorkers and half of Copenhagen’s inhabitants.

If you want to be as safe as possible, remember to wear a helmet and ride in designated bike lanes.

The only thing left to do now that you’re aware of these cycling statistics for 2021 is to locate the closest bicycle and join in the fun!