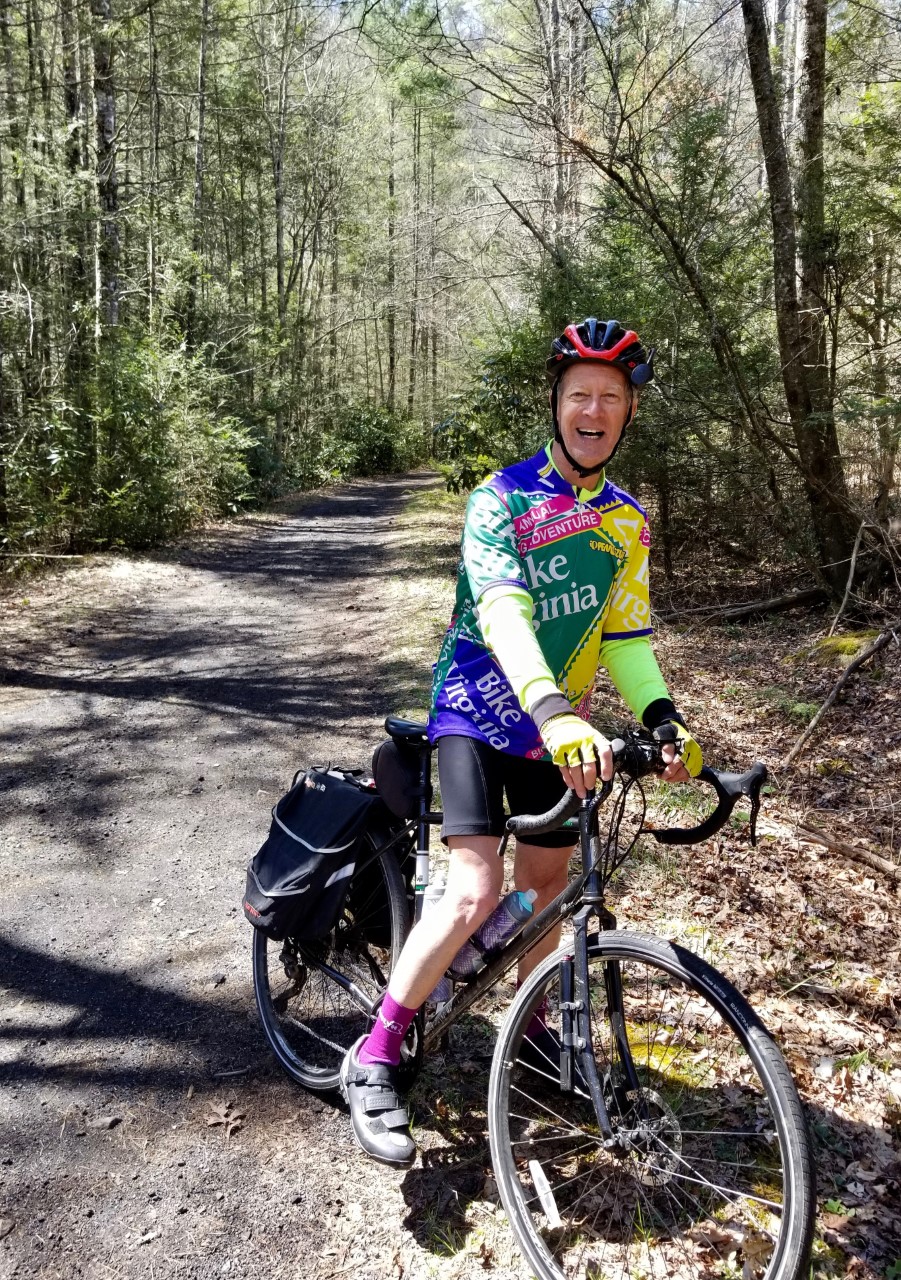 Virginia Is For Lovers of Cycling

Larry Lipman is a retired journalist and avid cyclist living in Northern Virginia.  He has ridden most of the major trails mentioned in this article.

The League of American Bicyclists ranked Virginia 9th in the nation for being a “Bicycle Friendly State,” and first among the 13 states in the southeastern United States.

The state publishes an official bicycling map showing several of the major trails in detail and highlighting numerous trail networks.

It’s a state where cyclists are comfortable riding solo on many streets, often with designated bike lanes, in group rides sponsored by clubs and bike shops, and in large organized events such as the multi-day Bike Virginia, which picks a different area of the state each summer to hold its moveable camping and biking experience on paved roads.

There are also Facebook pages and websites devoted to cycling in specific parts or jurisdictions in the state, such as Matthews County, which sponsors the annual Tour de Chesapeake road bike ride one weekend each spring.

These are multi-state routes that usually follow non-major highways.  The positive aspect of the routes is that they provide a bicycle pathway across the state; the negative aspect of the routes is that they are often narrow rural two-lane roads which might be bucolic at times, but can be hazardous when pedaling a heavily laden bike uphill with an impatient line of pickup trucks trying to pass.

To talk about bicycling in Virginia, a good place to start is at the beginning.  The beginning of America, that is.

The paved Virginia Capital Trail winds through the woods along scenic State Route 5—considered the oldest inland transportation route in the New World–that links Jamestown, where settlers established the first permanent English settlement in North America in 1607, and Richmond, the one-time capital of the Confederacy and the current capital of Virginia. Nurtrion tips for cycling long distance. History abounds here. The 52-mile Virginia Capital Trail starts in Jamestown. There is a state park and a national park covering the territory once occupied by the settlement.

Buildings have been reconstructed showing how the original settlement fortress might have looked, and replicas of the three ships that brought the settlers bob on the James River.

Just seven miles down the wide, sparsely traveled Colonial Parkway, is Williamsburg, which was the colonial capital of Virginia at the time of the American Revolution. T

he historic area has been reconstructed to look as it might have looked in 1770 (six years before the Revolution began)—including costumed period actors– and motor vehicles (and bikes) are banned in the historic district.

Although most of the trail goes through woodlands, portions pass vineyards and plantations and the homes of former president William Henry Harrison, who served only one month in 1841 and John Tyler, who succeeded him and served from 1841 to 1845. The trail ends in downtown Richmond and connects to other trails in the city.

About two hours drive by car north of Richmond is another bike trail associated with a president: the Mount Vernon Trail which starts at Mount Vernon, the home of George Washington, the Revolutionary War general and first president of the United States.

The 18-mile paved Mount Vernon trail winds mostly through wooded areas along the Potomac River, through the historic city of Alexandria, past Reagan National Airport (named in honor of President Ronald Reagan) and ends just past Theodore Roosevelt Island, named in honor of the nation’s 26th president who served from 1901 to 1909.

The Mount Vernon Trail offers breathtaking, photogenic views of Washington, D.C. just across the Potomac.  From the Virginia side of the river, one can easily see the Jefferson Memorial, the Washington Monument, the U.S. Capitol and the Lincoln Memorial.

At one point along the trail, the Lincoln Memorial, Washington Monument and U.S. Capitol are in perfect alignment. It’s a favorite spot for photographers.

From the trail, three bridges cross the Potomac into Washington: the 14th Street Bridge which ends at the foot of the Jefferson Memorial (in honor of president Thomas Jefferson); the Memorial Bridge, which links Arlington National Cemetery with the Lincoln Memorial; and the Francis Scott Key Bridge, (named in honor of the author of the Stars Spangled Banner) which leads to Georgetown.

Importantly, the Key Bridge also leads to the starting point for the Chesapeake & Ohio (C&O) Canal Trail, which runs through the District of Columbia and all the way through Maryland to Cumberland, where it connects to the Great Allegheny Passage Trail (GAP), which runs through Pennsylvania to Pittsburgh.

Two paved trails link to the Mount Vernon Trail—the Four Mile Run Trail at the airport and the Custis Trail (named after George Washington’s wife, Martha Custis Washington). Both of these trails merge into the Washington & Old Dominion Trail.  How to plan a cycling adventure.

This 45-mile paved trail generally follows the rail bed of the historic W&OD Railroad between Alexandria and Purcellville, passing through several small cities along the way and mostly woodland elsewhere.  Because it is a rail-to-trail, it is mostly flat with only a couple of minor hills along the way. The highlight of the trail, as the name implies, is the 2,400-foot long wooden High Bridge, built in 1853 and spanning 125 feet above the Appomattox River.  (At the time of this writing, the High Bridge is closed due to renovations).

South of the High Bridge Trail, almost to the North Carolina border, is the Tobacco Heritage Trail. Although this trail of crushed stone with some paved areas is only 17 miles long, it is expected to be the centerpiece of a 174-mile network of abandoned rail beds, bridges, rights-of-ways and state roads.

Several of Virginia’s most popular cycling trails are in the sparsely populated southwest portion of the state, near where it meets the neighboring states of West Virginia, Tennessee and North Carolina.

The New River Trail is a 57-mile, paved rail-to-trail that runs north and south along the New River and links the towns of Galax and Pulaski.  It also crosses USBR 76. There are more than 30 wooden trestle bridges and two tunnels along the way.

The Virginia Creeper Trail is 34 miles of rail-to-trail gravel and dirt that extends from the former station at the top of Whitetop Mountain, the second-highest summit in the state, and runs 17 miles downhill to the town of Damascus and then another 17 miles with a very slight uphill grade to the town of Abingdon.

The most popular route is from the mountaintop down, but many riders enjoy the challenge of riding up the trail.  There are shuttles that will take riders and their bikes (or bike rentals) from Abingdon or Damascus to the Whitetop Station for a small fee.

Along the route there are 47 (46 from the station) wooden trestle bridges including the popular Number 7, which was destroyed during a tornado in 2011 and rebuilt to its current 454-foot length, the longest on the trail.

The Heart of Appalachia Bike Route is a 128-mile network of roads that traverses four counties in southwest Virginia offering breathtaking scenery. The surface varies from road to gravel to single-track and should only be tackled by experience riders.

Amenities are few along the way, so riders should plan accordingly and stock up water and supplies in the few towns along the way.

There are two contiguous mountain parkways in Virginia that are popular with experienced cyclists because they were designed for cars and they lack shoulders.

The 105-mile Skyline Drive runs through Shenandoah National Park and extends from Front Royal at its northern terminus along the crest of the Blue Ridge Mountains to Rockfish Gap at the southern terminus.

At that point it becomes the Blue Ridge Parkway and extends another 217 miles before crossing and continuing into North Carolina near the town of Galax (a terminus for the New River Trail). There are numerous places for camping and lodging along the way.

Other excellent cycling trails in Virginia include:

Powell River Trail—This is a 2.4-mile paved rail-to-trail near Big Stone Gap. A highlight of the trail is the Bee Rock Tunnel, only 47 feet long.

Guest River Gorge Trail—This is a 9 mile rail-to-trail near Coeburn, which offers view of cliffs, waterfalls and an old tunnel.

Greenway system in Lynchburg—This is a network of paved and single-track trails covering 40 miles in and around Lynchburg.