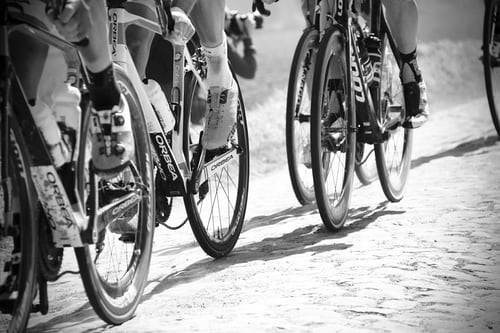 What is time trialing

Cycling times trials are a form of competitive bike racing where cyclists compete over a set distance to see who can ride it in the fastest time.

In England, cycling time trials are very popular, and events are typically 10 or 25 miles long, although they can be shorter or longer. In the summer months, it is common for local cycling clubs and race teams to an evening 10-mile time trial once a week.

These races happen midweek and provide an informal and friendly type of racing, with most people attending mainly for the social aspect.

However, some do take it very seriously. Between 20-50 cyclists compete in these races, and unlike regular bunch or mass start races, cyclists start on their own with a one-minute time gap between each rider.

So the cyclists who crosses over the finish line first that wins, but the cyclists who various types of bikes. Many cyclists use their regular road bikes, but some individuals opt for high tech carbon time trial bikes with disk wheels and aero bars.

In England, cycling time trials are run under the sporting governing body CTT. CTT have a long heritage amongst British cycle racing.

In the 1890’s road-racing was banned by the British government, and so cyclists had to get inventive. They created new racecourses with a unique letter and number coding system with a particular arrangement of letter and numbers corresponding to a specific course.

Even though road racing has been legalised again for many years, CTT has stuck with their slightly weird but wonderful course coding system.

With the current Covid19 restrictions that are still in place, time trials are one of the only forms of competitive racing that can still be held. My local cycling club. Velo Club Venta, hosted their first evening 10 of the year last night on 4th may 2021 in the p140 course.

The course is a typical out and back style time trial course, with the first mile and half being downhill before 3.5 miles of flat winding road up to a small roundabout where riders turn around to return along the same stretch of road that they have just come from.  Three essential tips for time trails.

The course is what most people would define as sporting, meaning that fast times are unlikely on this course due to the technical nature of the twisting narrow corners and hills on the return leg.

But I must admit that I prefer this type of sporting course compared to a busier but much quicker dual carriageway course.

There are elements of sporting courses that suit all riding abilities, and as such, there is a little bit for everyone.

Whether it is the fast downhills that you are good at or punching out of corners to get back up to speed after the twisting turns, the short sharp climbs that litter the return section of the course or just the constant steady-state power of the faster, flatter sections.

The weather can play a massive impact on this course with many exposed sections the wind will often play havoc with riders, especially those using deeper depth wheels and aerobars.

Lucky, tonight the wind is in our favor with a moderate tailwind on the outward leg of the course (the longest of the two sections) and a slight headwind on the return section.

With tonight’s race being the first race of the year for many, the atmosphere before the start was surprisingly calm and joyful. With many riders having not seen each other since pre-November lockdown, everyone is happy to be back with their teammates.

During sign-on, you can hear the chatter about power numbers and what effect the wind speed and direction might have on who wins tonight. I soon make my way to the start, the top of a big hill just outside King’s Somburne near Winchester.

It is 7:30 pm on a freezing Tuesday evening, and I know I have about 25 minutes of pain in front of me if I want to win this race. Riding the south downs for the first time.

Experience of the race

The race starts fast with a small series of rolling hills with riders hitting 35 mph+ on downhills before quickly having to sprint up the next hill, but you have to be careful not to go out to hard and start feeling fatigue too quickly as you’ve still got 9 miles to go before the finish.

The short sharp descent feels like a game of dodge the pothole whilst going as fast as you can due to the rough road surface. 3 miles in and we are onto the flatter faster section of this course wide open road with traffic giving you plenty of safe space allows you to ride as fast a possible.

My legs are starting to hurt by this point and i can see from the occasional glance at my garmin that my power numbers are down from what i would expect from this kind of effort normally. However, my speed is strong, riding at just over 28 miles an hour on a road bike. 5.5 miles in and we are making our way towards Fromsay and suddenly the roads have got noticeably narrower and the concerns are coming think and fast.

I am having to leave my braking to the very last minute and then having to stamp on the peddles to speed back up. Six miles in and I have reached the turn around a set of two small rounds about that are extremely well marshaled.

At the 7 mile mark my legs are screaming with lactic acid and I am defiantly feeling the head wind at this point. By this point, I’ve overtaken the 4 riders that started in front of me and going into the final 3 miles.

I can just about see another 2 riders about 30-40 seconds up the road. I am very thankful that they are providing me with a carrot to chase.

With just half a mile to go the riders are only about 10 seconds up the road and I am trying my best to catch them and ride as fast as I can. I keep telling myself that it is only one minute to go to just dig deep and give it everything I have got.

I’m doing everything I can to not think about how much my legs and lungs hurt I am counting the number of corners left until I hit the finish line. I’ve crossed the finish line and i can free wheel again. I make my way back to the sign on area with a few team mates, chatting about how the race was and if the wind slowed us down.

I get back to find I’ve finished 5th out of 30. Just 30 seconds away from the winner. Ouch, I guess I am just going to have to try a little bit harder next time to close that 30-second gap. Common mistakes when cycling long distances.