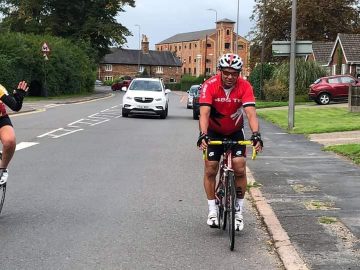 Looking for reasons to start cycling. Read his inspirng story.

My name is Steve Robinson, I’ve been riding a bike for as long as I can remember. The first two-wheeler I had was when I was about four or five years old. It was a little red bike with fat white tyres and I remember riding it around the housing estate in Desford, I also remember my first crash on it going over the handle bars.

Since then, I cannot remember ever being without a bike. I do remember my Grandad buying me a new red Raleigh when i was about 8 years old he bought it in Leicester from a shop down Narborough road it was 3 speed with twist grip gear change.

I’ve had lots of bikes since. I can remember as kids tying my fishing rod to the crossbar and a having a rucksack with a bottle of pop and a sandwich in it to ride to the local Ashby Canal to catch a few Perch. Happy Days.

When, I was 17 I kind of forgot about the bike for a few years because I bought a car on my 17th Birthday it was a Ford Anglia which cost £175 from Paynes Garage in Hinckley.

At the Age of 20 1977, I Started working for Caterpillar Tractors in Desford Leicestershire.

Building Fork Trucks. It was then I fell back in love with the bike, some of the lads biked to work from Hinckley every day a distance of 9 miles the short way.

I became aware that they were getting to work in around 30 to 40 mins the short way and it was taking me longer a lot of the time in the car with the traffic etc.

So, I decided to give it a go. Well, I loved it. And it was quite good fun riding with others to and from to work and back as I was living in Burbage near Hinckley, we often went on longer rides there and back some days.  Some of the lads i rode with rode for HCRC Hinckley Cycle Racing Club and were quite fast.

Anyway, one day a Chap called Mick Carson said to me why don’t you come and have a go at a 10 Mile Time Trial on the Hinckley Course I was a bit doubtful about having a go at such a thing has they had all good gear etc and I just had a bog-standard steel bike with 6 speed down tube shifters.

Mick said I could borrow his bike to do it on. So, the following Tuesday night I went up to the Hinckley 10 TT at Wolvey. I got my start number and pinned it on. Ready to Go.

So off I went on Micks bike it seemed a lot better to ride than my old thing. When I crossed the finish line I had recorded a time of 26.12 mins I was over the moon as Mick though I would only just make 30 mins.  I loved it and went back the following week and did it on my own bike and managed a time of 26.45 mins again i was so pleased. Read a beginners guide to road cycling.

I did about 2 or 3 more and never did any more, but continued to ride to work and back every day to Caterpillar, that was like doing a race some days on the way home, as there were quite a number of people now riding to and from work chasing each other down.

At the Age of 36, I found myself giving up the job at Caterpillar as I was now a single parent looking after my 2 children a daughter who was 11 and a son who was 6 I started doing a few part-time jobs to help keep a roof over our heads.

But I still found time to keep cycling when kids were at School. During this time I ended up with a spinal injury a disc had slipped and I was in a lot of pain and on hard-core pain killers, it got to the stage where i was almost housebound hardly able to walk even.

After 2 years of hospital visits and close to ending it all i seen a surgeon at Leicester General Hospital who said he could operate on me but there was a great chance i may never walk again, well i said to him i can hardly walk now and I am in so much pain even with tablets etc so he put me on the waiting list to have the operation.

Anyway, I got the Operation at Christmas time as there were a few cancellations i woke up in bed after the operation and the 1st thing i thought was can I move my toes, sure enough they moved, i thought that’s got to be a good sign and there was no pain either.

A few hours later the surgeon came to see me, asked how i felt. I said I am in no pain, that’s good he said and proceeded to lift both my legs in the air as i lay in the bed, how’s that feel he said, any pain. No none at all.

Good I will see you later and off he went. He came back a few hours later and got me out of bed and told me to walk down the ward, all went well from then on. When i was due to leave hospital a few days later the surgeon said to me.

Mr Robinson just take your time for a month or two do a lot of walking and do some cycling and swimming but not breast stroke as its bad for your back try front crawl.

This was great news i could ride my bike again. So back home i started walking daily and eventually got out on the bike.

This is when I started to do the Hinckley CRC time trials on a regular basis to keep me motivated and try to get fit again after being unable to do a lot with a bad back.

The first one I did after the operation took me 33 mins to complete the 10 miles I came last much too the delight of 2 ladies who did it for the 1st time.

Over the next few months i got a bit better and got my time down to 27 mins. This was on an old Raleigh 6 speed with down tube shifters.

Anyway, one evening a chap called Martin came up to me and said you’re doing really well on that old bike well done, I said thanks but i would love to go a bit quicker and get down to the low 26 minute mark i did a few years ago before my back issue.

Well Martin said come out with me on Sunday and i will get you quicker. So the following Sunday i met up with Martin and off we went.

Well, he took me over to Charnwood forest area in Leicestershire up all the biggest hills he knew of over there and we ended up doing around 60 or 70 miles the last hill i came to i fell off the bike with cramp in both my legs at an hill called the Ski Slope at a place called Orton on the Hill.

This amused Martin. Anyway, the following Tuesday evening at the Hinckley TT my time was quicker i got below 27 mins. From then one i went every Sunday with Martin and other who were well better and faster than me but it was fun and i kept hanging in with them on my old 6 speed steel Raleigh doing 80 to 100 miles on those Sundays in all weathers.

On Tuesday Nights at the Hinckley TTs i started beating a few of the better riders there and a lot if them didn’t like it and said things like I must have had a bad night or some other comment, it was never well-done Robbo, so I got a white Tee Shirt and when i beat one of these so called good riders i put their name on the Tee Shirt with a permanent marker pen.

The Tee Shirt had the Roll of Shame across the shoulders at the back. As i got quicker more names ended up on that Tee Shirt. I’ve still got it 20 + years later.

It was just that back then Those Time Trial riders were a secretive lot not telling you where they were riding etc or encouraging at all.

But Martin and his group of friends were great fun even though they always took the Micky out of me and my bike they made me better and i will always be grateful for that.

After a couple of years of doing Time Trials i was asked to join a new club it was going to be a Triathlon Club it was decided to be called 1485 Tri Club.

I couldn’t swim and i wasn’t a runner but i learned to swim and started running too. I’ve been a member of 1485 Tri Club since its beginning in 1998 and loved it since.

I’ve taken part in 2 world age group championships the 1st in Queens Town New Zealand and another in Hamburg Germany. I’ve made many friends through Cycling and Triathlon. Check out our mountain bike beginners guide.

I love the Swimming too we swam around Jersey one year 3 of us in a relay it was fantastic. Now I am not as quick as I was on the bike but still love it and still do a few TTs and i also take beginners out on Saturday mornings and hopefully they will enjoy Cycling as much as i do.