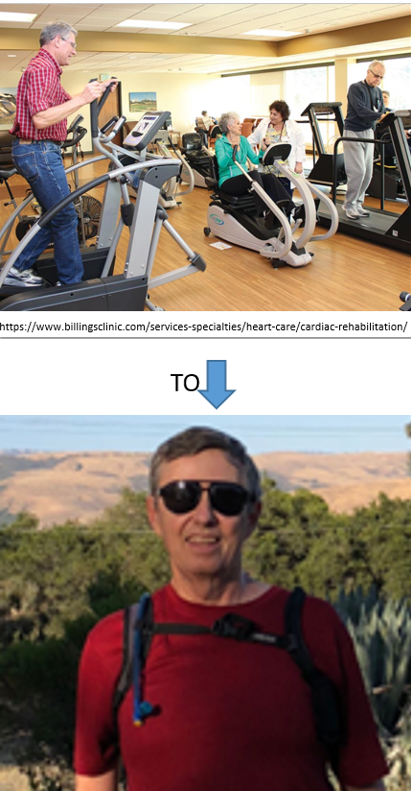 Read why Richard is so passionate about cycling. Richard has a blog called Bioniccoldguy that he shares his advice on physical and metal training.

I was born in 1953 in central New Jersey, about 30 miles south of New York City. This was suburbia, but at that time it was right on the fringe of the urban sprawl. So just south was dairy farm country and thousands of acres of undeveloped land we called “the woods”.

My brother and cousins and I would disappear into the woods exploring for hours and didn’t get in trouble as long as we got back in time for dinner.

I rode my bike or walked to school. There was no infrastructure like bike lanes back then, but there were enough fewer cars back in the 50s and 60s compared to now that you could map out safe routes.

I wasn’t very good at organized team sports because I was a skinny little runt. But I played informal sports with friends and family and biked a lot for transportation. Like most kids, I abandoned biking at 15 or so when I started dreaming about cars instead. I remained pretty sedentary through college except for the occasional pick-up basketball game.

Upon graduation as a Civil Engineer I got married to my wife. Karen. That worked out pretty well as we are still married 47 years latter. I took a job with a consulting firm.

I had trouble fitting being active around a full time work schedule, so I again got out of shape. I tried to counter it by taking up running. I didn’t enjoy running much because I went too fast, it did not occur to me that it might be more enjoyable to go at a more comfortable pace.

After a couple of years, we moved to Northern California, where I found a job in Palo Alto with another consulting firm. We about 10 miles from work.

It turned out that commuting by car was pretty awful, and the best option was getting to work by bike. I got a nice workout and arrived relaxed to work in the morning and home at night. This changed everything, because for the first time I had an activity I enjoyed, and doing it actually saved me time.

I then was fortunate enough to receive a fellowship to Stanford for my master’s year, where I switched from civil to mechanical engineering. After the masters, I continued on to get a PhD, which was paid for by graduate research assistantships.

Karen and I lived off campus 12 miles away so I continued with my bike commuting. After graduating I got a research position in Boulder, Colorado.

Boulder is an outdoor enthusiast’s and athlete’s mecca. I continued my biking, but it was harder to ride through the winters in Boulder, so I also got into hiking with all the beautiful trails in that area.

I then took a job with IBM research in south San Jose, back in Northern California. It wasn’t practical for me to commute by bike on a regular basis, because although the local roads in the area are great for riding, they have narrow shoulders, and I wasn’t comfortable next to the insanely fast traffic at rush hour.

So I gave up biking for running, and got more heavily into it this time. Over the next 20 years I ran countless 10K’s, and three marathons.

First was a congenital condition where the valve has only two leaflets, known as a bicuspid valve. This does not open properly your entire life, but maybe opens enough so you get by.

Second, as you get older and it calcifies it goes bad more quickly than a normal valve.  My cardiologist suspected it was a bicuspid valve, because I had significant stenosis already at the relatively young age of 63.

A normal aortic valve opens to about 2.5 to 4 cm2, while with moderate stenosis it is about 1 to 1.5 cm2, and it is considered severe when it goes below 1. Here’s what that amount of opening looks like: Accidental Cyclist by John Lewis

Mine was already like the middle picture, where the blood flow to my entire body had to squeeze through one of the fat straws for a Starbucks frappuccino instead of a garden hose. Later it would progress to the right picture, as small as a regular drinking straw.

That happened within a couple of years. The first symptom was a repeat of the badly out of breath symptom, so my cardiologist had me wear a monitor for a couple of weeks looking for arrhythmias.

Sure enough it detected atrial fibrillation (afib) that came on with exercise, probably a side effect of the bum heart valve. Afib is dangerous because it increases your risk of stroke. In addition, my next echocardiogram showed I’d progressed to severe stenosis. It was now time to get the valve replaced.

The best surgeon in my area turned out to be Dr. Vincent Gaudiani, who operates at El Camino hospital in Mountain View, Ca, a little over 30 miles from our house.

Valve replacement usually requires a “median sternotomy” which requires cutting your sternum completely in half. More minimally invasive procedures are available, but unfortunately because I also had afib, we needed to do the “Maze” procedure while he had me open, and this requires the full sternum cut.

We decided to go with a tissue valve instead of a mechanical one because the tissue valves don’t require blood thinners.

Dr. Gaudiani made it clear we had to do this asap. Once it starts progressing, stenosis gets worse quickly. I’d probably be out of breath just walking around slowly within a few months, and could be dead in a year. So we scheduled the surgery as soon as we could.

I must admit I was nervous going into this surgery, it was a biggy and not without risk. Here is my number one tip: put yourself in a good surgeon’s hands and trust that it will go well.

Do not focus on anything negative like the slight possibility of things going wrong in the surgery. Instead, focus on how great the outcome will be, and how much better you’ll feel in a couple of months after some rehab.  Why i love Cycling in the Winter.

With good attitude in place, Karen and I showed up bright and early on August 11, 2017 at El Camino hospital.

During my surgery. the new valve was sutured in place . The Maze procedure was then performed: The heart is pulled forward out of the pericardium.

Talk about having your life in somebodies hands! Small nicks are made on the surface in strategic places and then sewn shut.  Read Steven Robinsons story.

This will leave scar tissue that disrupts the propagation of abnormal electrical signals that can cause afib. Dr. Gaudiani performed this complex procedure superbly in just over 90 minutes. Read Eileens chester wheelers passion for cycling.

The hospital stay was a bit tougher than for the hips. The major side effect, from the surgery, which was not diagnosed till later, was that I had pericarditis, or inflammation of the lining around the heart.

This caused weeping of fluid which ended up accumulating around my lunges (pleural effusion). So I had discomfort in my upper back.

Next morning I woke with no pain. I was receiving intravenous diuretic to get rid of excess fluid. At this point I found from the pathology report that the removed heart valve had indeed been bicuspid, as well as calcified.

Right away they started me doing PT, mostly short walks around the hallway that gradually get longer and longer.

Under the circumstances, I was feeling pretty good about my progress. But then the physical therapist took me to a set of stairs.

After going slowly up one flight, I was on the landing gasping for breath. She said“don’t worry, that’s normal”, but this was knocked any cockiness I may have had about rehab out of me.

Stairs remained my nemesis for several months, although I got slowly better at them. It turned out the severity was worse in the early days because of continued fluid around the lungs. After a couple of nights I was well enough to go home.

My at-home instructions were to start walking ramp it each day, And no lifting over 5 pounds (one of my precautions until the sternum healed).

And I had to be really careful about not falling for the first couple of months while my sternum was vulnerable.  It was great when I started walking outside (carefully, on nice flat sidewalks and paths).

The pleural effusion issue get coming back during this time until eventually my cardiologist just kept me on the strong diuretic (Lasix) for several months till it finally cleared up.

My other remaining symptom was that my resting heart rate was still abnormally high. It was less than 60 before my surgery because I’m in decent shape, normal for my age is low to mid 70’s. But mine was now in the 90s.

This is common after my type of surgery, and I was assured it would eventually clear up but could take up to a year (which turned out to be true).

My instructions recommended starting cardiac rehab after six weeks. There is a nice rehab facility at El Camino, where I ended up going for 30 sessions.

The staff was very nice and competent, nurses and PTs specializing in cardiac rehab. The facility was like a gym, but they had you wear a monitoring device that was constantly checking your heart rate and for arrhythmias, plus they would come by to get your blood pressure and see how you were doing.

I also could start using my arms on the elliptical. I routinely ran my heart rate up to as much as 140 and we never saw arrhythmia in any of the sessions.

And it helped I could go hard with my arms on the machines without bothering my sternum. By the end of my 30 sessions, I was able to go quite strenuously without exceeding my heart rate limit, and it was a great confidence booster knowing that no heart abnormalities were detected.

Around this time, after about 4 months post-op, my sternum was healed up enough to ride and hike (carefully!) outdoors, which I did on non-rehab days.

It was really nice to be able to get back to working out outdoors again. Things have progressed nicely in the four years since the surgery.

I’m probably a bit slower since I’m 68, but it doesn’t feel like it because the replacement valve makes me feel good as new. And my sternum has completely healed so I can do strength training as hard as ever.

In my old age adventures so far, I got two new hips for my 60th birthday, and a new heart valve for my 65th. Karen says she’d really rather I didn’t get any replacement parts for my 70th. I’m inclined to agree with her.   Virginia is for lovers of cycling by Larry Lipman  .