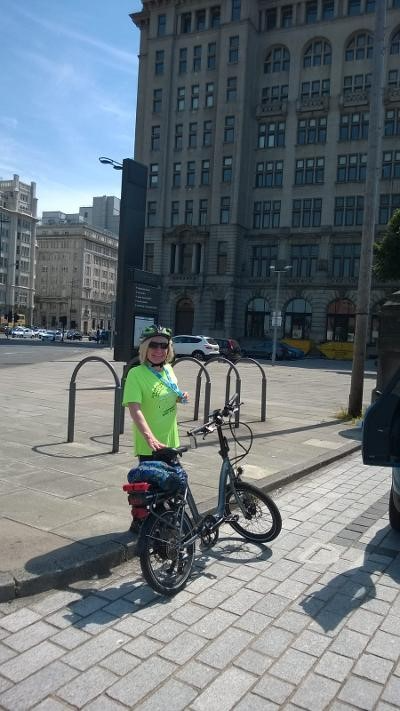 I’ve lived my whole life with a rare spinal condition called Diastematomyelia which causes chronic neurological pain. Scans show that my spinal cord is split from my shoulders to the end of my spine and doctors say it’s incredible that I am not paralysed.

I have endured a long list of extremely painful surgical procedures, including being hanged and stretched (literally), encased in a plaster jacket for nine months and had bone graphs and metal rods inserted along my spine –which eventually broke and had to be removed.

I was just eighteen when consultants told me there was nothing more they could do for me and that as I aged I would most likely suffer increasing levels of pain which I would just have to learn to live with.

Ignoring my physical limitations, I went on to spend many happy years as a teacher, specialising in working with children with sensory and physical impairments, until I reached the age of fifty, by which time I had developed chronic osteoporosis and due to those aforementioned increasing levels of pain, was forced to give up my career.

That was a dark period of time, the constant pain drained my energy levels and I became housebound. Fortunately, I come from good Celtic stock and I would not be beaten; as I have done throughout my life, I choose to focus on what I could do, rather than what I couldn’t.

I discovered a fantastic cycling charity that works hard to enable adults with all kinds of disabilities, to improve their health and wellbeing through cycling.

I went along to a taster day where, rather alarmingly, I was put on a very large electric bike and told to ride round the car park. After being informed “You’ll be fine” I joined some of the guys as they cycled around the nearby lanes. After that I was hooked.

Cycling is one the very few activities I have rediscovered that not only keeps me fit, but which doesn’t cause me severe discomfort, meaning I can cycle for much longer than I can sit in a wheelchair or on a mobility scooter.

And of course, I love the wonderful feeling of freedom it gives me and my electric bike which suits my very specific requirements, has enabled me to cycle around Anglesey, Lancashire, the Isle of Man and even complete the Chester to Liverpool charity ride through the Mersey tunnel – but those are stories for another time. Five Mountain bike trike tips and teachniques.

Fast forward a few years and a completely new and unforeseen set of physical difficulties set me on a quest to find a different set of wheels.

I tried many types of wheelchairs with a variety of wheels and ways of propelling them but couldn’t find the right one until I discovered the Mountain Trike (MT) which thanks to its unique lever drive is the only wheeled-chair I can self propel and which along with its incredible suspension, places less strain on my spinal cord.  Welsh mountain bike trails.

As soon as I sat in the comfortable seat and felt no pain when I went over the curb onto the grass I immediately knew it would make all the difference to me and a trial session confirmed this. Read our mountain bike beginners guide.

Having an all-terrain, Mountain Trike or what I like to call my ‘Walking Wheels’ has made it possible for me to access the kinds of terrain my bike wouldn’t be able to such as country parks,  beaches and even Chester’s city walls.

The incredible, invigorating sensory experiences I have been able to enjoy with my family and friends, made me want others to be able to enjoy similar experiences for themselves – along with the added side benefits of an improvement in their comfort, mobility, health and quality of life. And so ‘Chester Wheelers’ was born.

The pandemic presented many challenges and local-lockdowns effectively put a stop to group gatherings but it also raised a lot of concerns about the future of vulnerable people and specifically those with mobility issues, who having endured months of isolation might now not have the confidence to venture out and enjoy exploring safe cycle paths and roads.

As the Inclusive Officer for Chester Cycling Campaign, I work closely with the CCC, Sustrans and other volunteer groups to improve Chester’s cycling infrastructure, making sure that as many routes as possible are made as accessible as they can be, to those of us who use mobility aids – whether that be a wheelchair, scooter, electric bike or Mountain Trike.

‘Frustration and exhaustion attempting to get through a barriers for my daily lockdown exercise trying to find local accessible shared cycle walking paths. These issues are now hopefully soon to be modified to allow trikes and other ‘wheelers’ access for all’..

Chester Wheelers works closely with other groups of wheelchair users and disabled cyclists and prior to and in between lockdowns I visited inclusive cycling centres and accessible venues around the country to see how we might incorporate best practices to not just raise awareness but actually improve facilities for ‘wheelers’ within Cheshire.

Chester Wheelers works closely with other groups of wheelchair users and disabled cyclists and prior to and in between lockdowns I visited inclusive cycling centres and accessible venues around the country to see how we might incorporate best practices to not just raise awareness but actually improve facilities for ‘wheelers’ within Cheshire. Read John cycling experience.

I want people to contact Chester Wheelers so that they too can experience for themselves the joys of the great outdoors and together we can enjoy a variety of natural surroundings and attractions, accessible cafes and different places of interest. Steves inspirying passion for cycling.

Demonstrations and skills training for individuals can also be arranged, on a try-before-you-buy basis so that the benefits of the Mountain Trike (independence, fitness, social, fun) and wheeled mobility aids can be experienced first-hand.

Details can also be provided regarding venues where MT and mobility equipment can be loaned, such as at National Trust properties, country shows, hire centres and accessible holiday accommodation, along with useful information about how to transport your equipment and charity funding you might be able to source towards purchasing specialist equipment.

Chester Wheelers is in the process of organising 2021/22 events (subject to government regulations) and would love you to join us. For more information

‘I am now looking forward to April 2021 and exploring the freedom of the countryside in my All terrain Mountain Trike and using my e-bike to explore shared cycle paths and cafes.

I hope to inspire other ‘Wheelers’ and walkers to join me’.