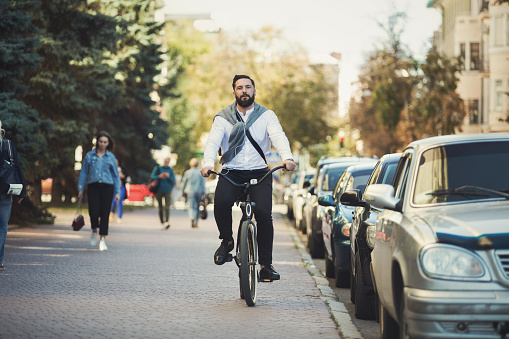 Can you cycle on the pavement in the UK?

Cycles are regarded as vehicles under British law. Therefore, riding a bike on a pavement not marked as a cycle route is forbidden.

The maximum punishment is £500. However, it is frequently handled with a £50 fixed penalty notice.

Police, on the other hand, do not always enforce the law. I took me 7 days to find the correct answer of this question. Let me explain it in this article.

“You are not allowed to ride on a pavement,” in the Highway Code. The violation of riding a bicycle on the pavement is penalized by a fine of £30 issued on the scene in the form of a fixed penalty notice.

It is an offence under Schedule 3 and Section 51 of the Road Traffic Offenders Act of 1988.

Is cycling on a footpath illegal?

We must be clear from the start regarding footway vs footpath. Footpaths are pedestrian-only and prohibit bicycles.

Footpaths are freestanding pathways encompassing 80% of rural public walkways and many urban walks that supplement the road network.

These routes are typically legal for cycling, except when prohibited by local bylaws or traffic restrictions. No cases indicate that riding on pavement is a public annoyance and a criminal.

Conventional wisdom says cycling on a footpath constitutes a trespass against the property. The owner can then remove the invader. It would be a civil matter between the owner and the biker, with no other parties involved. For example, members of the public who oppose cycling on routes would have no input. Is riding on a path trespass? Read more on the highway code.

Define trespass. Owners have exclusive use of their land under common law. It means they can evict anyone without cause. Owners can’t do this to legitimate occupants.

Right-of-way is a legal power. It has limits. When a right of way is limited to one form of movement, such as walking, a user cannot utilize another manner.

so F2; anybody who commits any of the offences above will forfeit and pay the penalty not exceeding [F3level 2 on the standard scale] for every offence, in addition to the damages caused by the offence.

Why do people cycle on the pavement?

The researchers discovered that “riding on the pavement is a constant and recurrent aspect of urban cycling” and that it should be seen as “a reasonable conclusion from the bikers’ point of view.

“The behaviour of riding on the pavement is related to the perception that urban traffic is dangerous,” they said.

“Managing personal safety is a skill that urban cyclists must acquire to feel safe and arrive at their destinations on time. This aspect of such management is shown by riding on the pavement.

Therefore, policies, urban planning, and infrastructure design that do not align with cyclists’ desires for smooth and safe infrastructure are likely to produce undesirable behaviour and conflicts.

Moreover, suppose a physical environment is viewed as unsafe. In that case, it will discourage particular groups from choosing cycling as a form of transportation, as the present study demonstrates.”

“If there is a true desire, in the pursuit of more sustainable transportation, to boost cycling and make it a safe and enjoyable form of transportation, planning and design of urban space must take cyclists’ views and requirements into greater consideration,” they said

Are many cyclists fined for cycling on the pavement?

There is a maximum fine of £500 for riding on the pavement. In most situations, the police will issue a £50 Fixed Penalty Notice (On-the-Spot Fine).

Still, local governments can make it such by a municipal ordinance or traffic regulation order. No enforcement action, including the issue of a Fixed Penalty Notice, can be taken by the police.

Pushing a bicycle in regions where cycling is forbidden is typically seen as legal. In general, riding on a pavement or footpath is prohibited.

The police are instructed to use discretion when issuing Fixed Penalty Notices for the violation. Cyclists whose actions harm pedestrians should be distinguished from those who behave out of concern for their safety without endangering others. Find out of you an cycle on a dual carriageway or take a mountain bike on a pavement.

Reedits thoughts on whether Cyclists Should be allowed on the Pavement

It should be a capital offence. There is nothing good about this. The only protection you have is to look disapprovingly at the idiot biker when you move out of the path.

In my experience, when cycle lanes and walkways are separated, people always use the cycle lanes.

As a cyclist, I believe that all cyclists should be aware that pedalling on the pavement where there is no Bridleway or cycle route will result in a £30 fine. Although the police rarely enforce the legislation, it is nevertheless a law. Read about 5 essentials to take bike packing.

Under British law, bicycles are considered vehicles. It is illegal to ride a bicycle on a pavement not signposted as a cycleway. The maximum penalty is £500.

However, offenders are often issued a £50 fixed penalty notice. In contrast, police do not always enforce the law. Footpaths make up approximately 80% of rural public footpaths and many urban walks in addition to the road network.

Road Act of 1835 According to experts at the University of Bristol, riding on the pavement is a “constant and repeated component” of urban cycling.

They claim that the conduct of riding on the pavement is connected to the belief that urban traffic is harmful.

According to studies, certain groups will be dissuaded from riding if they perceive their physical environment to be hazardous. From 2,196 in 2003 to 1,644 in 2007, the number of pavements cycling violations has declined.

Cycling on a pavement is not a criminal infraction, but municipal ordinances and traffic regulation orders can make it one.

The police cannot conduct any enforcement action, including issuing a Fixed Penalty Notice.